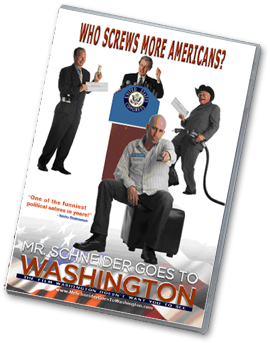 Documentary Feature
Fruckis Chuck Films; Directed by Jonathan Neil Schneider
NR: 74 minutes; 2008
Frustrated by Washington and his indifference for it, Jonathan Neil Schneider is finally shaken off his comfortable couch and travels to Washington to find out if things are as bad as he feared.  Sadly, he is not disappointed.
Wait…“Not all political documentaries are dull and staid… Perhaps it’s what you’d expect from a reality producer (America’s Next Top Model), but the result is a virtual makeover of the genre to make it fresh and fun” writes the Cucalorus Film Festival where the film played to a packed audience.  The George Washington University’s Dean Arterton adds, “Not only is Mr. Schneider Goes to Washington one of the more entertaining documentaries I’ve seen, the film is a remarkable effective way to educate students on the inner workings of parties, politics and special interests.  I highly recommend it.”